Trolls - From the NYT 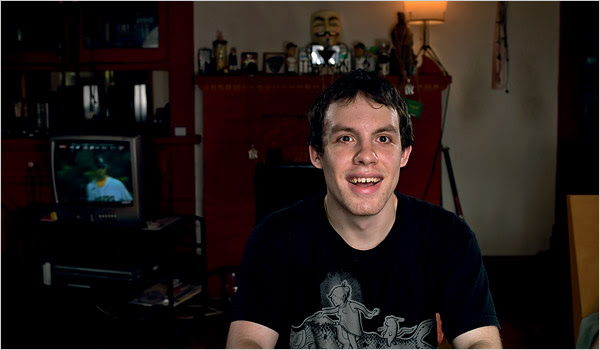 The Trolls Among Us: Weev (not, of course, his real name) is part of a growing Internet subculture with a fluid morality and a disdain for pretty much everyone else online.

One afternoon in the spring of 2006, for reasons unknown to those who knew him, Mitchell Henderson, a seventh grader from Rochester, Minn., took a .22-caliber rifle down from a shelf in his parents’ bedroom closet and shot himself in the head. The next morning, Mitchell’s school assembled in the gym to begin mourning. His classmates created a virtual memorial on MySpace and garlanded it with remembrances. One wrote that Mitchell was “an hero to take that shot, to leave us all behind. God do we wish we could take it back. . . . ” Someone e-mailed a clipping of Mitchell’s newspaper obituary to MyDeathSpace.com, a Web site that links to the MySpace pages of the dead. From MyDeathSpace, Mitchell’s page came to the attention of an Internet message board known as /b/ and the “trolls,” as they have come to be called, who dwell there.

/b/ is the designated “random” board of 4chan.org, a group of message boards that draws more than 200 million page views a month. A post consists of an image and a few lines of text. Almost everyone posts as “anonymous.” In effect, this makes /b/ a panopticon in reverse — nobody can see anybody, and everybody can claim to speak from the center. The anonymous denizens of 4chan’s other boards — devoted to travel, fitness and several genres of pornography — refer to the /b/-dwellers as “/b/tards.”

Measured in terms of depravity, insularity and traffic-driven turnover, the culture of /b/ has little precedent. /b/ reads like the inside of a high-school bathroom stall, or an obscene telephone party line, or a blog with no posts and all comments filled with slang that you are too old to understand.

Something about Mitchell Henderson struck the denizens of /b/ as funny. They were especially amused by a reference on his MySpace page to a lost iPod. Mitchell Henderson, /b/ decided, had killed himself over a lost iPod. The “an hero” meme was born. Within hours, the anonymous multitudes were wrapping the tragedy of Mitchell’s death in absurdity.

Someone hacked Henderson’s MySpace page and gave him the face of a zombie. Someone placed an iPod on Henderson’s grave, took a picture and posted it to /b/. Henderson’s face was appended to dancing iPods, spinning iPods, hardcore porn scenes. A dramatic re-enactment of Henderson’s demise appeared on YouTube, complete with shattered iPod. The phone began ringing at Mitchell’s parents’ home. “It sounded like kids,” remembers Mitchell’s father, Mark Henderson, a 44-year-old I.T. executive. “They’d say, ‘Hi, this is Mitchell, I’m at the cemetery.’ ‘Hi, I’ve got Mitchell’s iPod.’ ‘Hi, I’m Mitchell’s ghost, the front door is locked. Can you come down and let me in?’ ” He sighed. “It really got to my wife.” The calls continued for a year and a half.

In the late 1980s, Internet users adopted the word “troll” to denote someone who intentionally disrupts online communities. Early trolling was relatively innocuous, taking place inside of small, single-topic Usenet groups. The trolls employed what the M.I.T. professor Judith Donath calls a “pseudo-naïve” tactic, asking stupid questions and seeing who would rise to the bait. The game was to find out who would see through this stereotypical newbie behavior, and who would fall for it. As one guide to trolldom puts it, “If you don’t fall for the joke, you get to be in on it.”

Today the Internet is much more than esoteric discussion forums. It is a mass medium for defining who we are to ourselves and to others. Teenagers groom their MySpace profiles as intensely as their hair; escapists clock 50-hour weeks in virtual worlds, accumulating gold for their online avatars. Anyone seeking work or love can expect to be Googled. As our emotional investment in the Internet has grown, the stakes for trolling — for provoking strangers online — have risen. Trolling has evolved from ironic solo skit to vicious group hunt.

“Lulz” is how trolls keep score. A corruption of “LOL” or “laugh out loud,” “lulz” means the joy of disrupting another’s emotional equilibrium. “Lulz is watching someone lose their mind at their computer 2,000 miles away while you chat with friends and laugh,” said one ex-troll who, like many people I contacted, refused to disclose his legal identity.

Another troll explained the lulz as a quasi-thermodynamic exchange between the sensitive and the cruel: “You look for someone who is full of it, a real blowhard. Then you exploit their insecurities to get an insane amount of drama, laughs and lulz. Rules would be simple: 1. Do whatever it takes to get lulz. 2. Make sure the lulz is widely distributed. This will allow for more lulz to be made. 3. The game is never over until all the lulz have been had.”

But the logic of lulz extends far beyond /b/ to the anonymous message boards that seem to be springing up everywhere. Two female Yale Law School students have filed a suit against pseudonymous users who posted violent fantasies about them on AutoAdmit, a college-admissions message board. In China, anonymous nationalists are posting death threats against pro-Tibet activists, along with their names and home addresses. Technology, apparently, does more than harness the wisdom of the crowd. It can intensify its hatred as well.