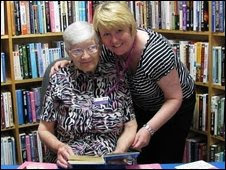 An avid reader in south west Scotland is on the brink of borrowing her 25,000th book from her local libraries.

Louise Brown, 91, from Stranraer, took her first book on loan from Castle Douglas library in 1946.

Since then she has borrowed at least six books every week throughout each year and has recently increased that to about 12 volumes every seven days.

Library staff said they were amazed by the achievement, particularly since Mrs Brown has never had an overdue fine.

The Dumfries and Galloway pensioner first became a member at Castle Douglas library and has particularly fond memories of the staff there.

She began using Stranraer Library in October 2002 when she moved there to live with her daughter.

Staff at the library described Mrs Brown as a "remarkable lady" and said they looked forward to her weekly visits.

They also believe that her book borrowing figures could constitute a Scottish record.

They have asked any library with a more prolific reader to contact them.

Janice Goldie, the cultural services manager for the region, said they had not heard of anyone who could match her.

She said: "We are fascinated to know if Mrs Brown's record can be beaten.

"There may be other people out there who can beat them and we would love them to get in touch.

"We very much want Dumfries and Galloway to be celebrated as a reading region."