[Thanks to Toni for this link]

In August, the Coalition of Journalists for Open Government reported that “current government handling of FOIA requests is deteriorating” and that the Justice Department was “consistently granted the lowest percentage of [FOIA] appeals of any agency.”

But now, the White House is doing everything it can to neuter the law. Sen. Pat Leahy (D-VT) said yesterday that Bush’s FY2009 “funds for the Office of Government Information Services authorized under the newly enacted OPEN Government Act will be shifted to the Department of Justice” from the National Archives. Congress Daily reports:

“But by shifting the funding to the Justice Department, OMB would effectively eliminate the office, because it appears no similar operation would be created there,” according to an aide to Sen. Pat Leahy (D-VT). […]

National Archives officials are relatively independent of political pressure, the staffer explained, “but DOJ is different.” Government transparency advocates consider the department hostile to efforts to improve FOIA responsiveness, in part because it represents agencies sued by FOIA requesters.

Sen. John Cornyn (R-TX), a cosponsor of the OPEN Government legislation said he “does agree with Senator Leahy and would oppose that effort” of the adminstration.

The Justice Department’s efforts to protect government secrecy are notorious. In fact, in the 109th Congress, the Department “squelched efforts to pass the OPEN Government Act.” But even initially “putting it [funding] in DOJ would essentially obviate what Leahy and Cornyn did with the legislation,” said Patrice McDermott of OpenTheGovernment.org

Bush’s noncompliance with the legislation makes clear his effort to return to his old ways of egregious government secrecy. 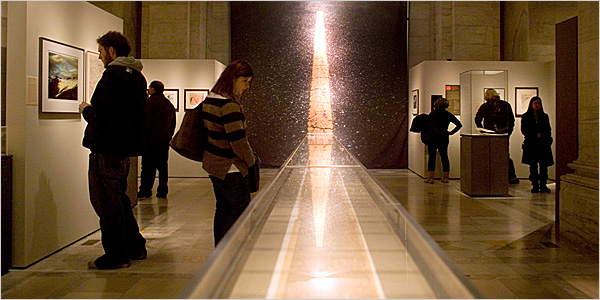 The draft of “On the Road” at the library on 42nd Street.

EVERYONE knows libraries are not just about books anymore, but no one knows it better that the women at the main information booth of the New York Public Library at 42nd Street and Fifth Avenue.

The two most common questions they field: Where are the restrooms? And where’s the free Internet?

But better questions would be:

• Which way to the Kerouac exhibition?

• How can I see a Gutenberg Bible?

• Where is the current issue of the journal of Australian Aboriginal Studies?

A bleak winter weekend is a great time to haunt the city’s libraries, when they seem to serve almost as much as museums and performance halls as repositories of the written word.

Though noteworthy libraries dot the five boroughs, including the new Bronx Library Center and historic branches financed by Andrew Carnegie, the natural place to start is at the famous lions on Fifth Avenue, at what is officially the Humanities and Social Sciences Library.

This winter, the landmark library at 42nd Street is home to “Beatific Soul: Jack Kerouac on the Road,” an exhibition built largely from the library’s own Jack Kerouac Archive. It traces Kerouac’s peripatetic life using unpublished manuscripts, photos, journals and notebooks, but the centerpiece is the actual scroll Kerouac used to type out “On the Road.”

By March, there will be another set of exhibitions: on John Milton, who would have turned 400 this year; on Édouard Baldus’s 19th-century photographs of French historic sites; and on French cliché-verre landscape prints. You feel more cultured just thinking about a visit. The library itself is also worth perusing. Flip through the 11,000 periodicals that are available upon request in the DeWitt Wallace Periodical Room. Or explore the popular map division, or the 440,000-item Asian and Middle Eastern division.

Two notes: though the library at 42nd Street is open (and has tours) during the weekend, many sections are closed on Sundays. You also should apply online for a free Access card, needed to request some materials, if you think you’ll be interested in rummaging. (New York City residence is not required.)

Other research libraries worth checking out are the Schomburg Center for Research in Black Culture and the Library for the Performing Arts (though both are closed Sundays).

The Schomburg, in Harlem, is looking sharp after an $11 million overhaul last year, and holds, among much else, 400 black newspapers, rare books and the original manuscript of “Native Son” by Richard Wright. On Feb. 4, it will open the Abyssinian Baptist Church Bicentennial Exhibition, examining the evolution of what, at the time of its founding, was the only African-American Baptist church in the state of New York.

Though it also has exhibition halls, the most attractive feature of the Library for the Performing Arts, next to Lincoln Center, is the free screenings and performances. Coming highlights include the Russian pianist Maxim Anikushin playing Beethoven and Schubert (Jan. 31) and the African-American historian Camille F. Forbes on the pioneering black comedian Bert Williams (Feb. 2).

And again, there’s the arts library’s intriguing collection. A random search through the card catalog turned up a volume — a scrapbook, really — of 19th-century theater programs, just slightly crumbling, with a whiff of musty paper that no scanned image can evoke.

Among them is the program for the Nov. 17, 1884 performance of “Hamlet” at the Boston Museum starring Edwin Booth. He returned two days later to play Iago in “Othello,” as well as the title role in “Macbeth” later that evening. Now that’s a lot of iambic pentameter.

Finally, the Morgan Library & Museum may not be part of the public library system, but it shouldn’t be missed. The complex of buildings in Murray Hill includes (among other things) the financier J. Pierpont Morgan’s original library, completed in 1906, and a 2006 expansion by the architect Renzo Piano, who added exhibition space and a cafe. A restaurant in the original building serves lunch daily and dinner on Fridays until 8 p.m. Menus are designed to correspond with exhibitions.

In the West Room, which served as Morgan’s private study, the 16th-century coffered ceiling imported from Europe and the red damask wallpaper give the place a royal air.

In his library, three stories of books line the 30-foot walls (except where there hangs a Baroque tapestry depicting one of the Seven Deadly Sins.

Elsewhere in the building, you’ll find amazing illuminated manuscripts, a 1240 pocket Bible and even an original print of the Declaration of Independence. Oh, it also has three Gutenberg Bibles, beating the Humanities and Social Sciences Library by two.

The reading doesn’t have to end at closing time. The Library Hotel in Midtown has a collection of 6,000 books organized, and this is not a joke, by floor according to the Dewey Decimal system.

LOST IN THE STACKS