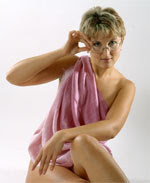 The 2008 calendar will feature 12 of the nation's sexiest librarians in revealing attire. The librarians appearing in the calendar were chosen earlier this year from among finalists in the ALA's "Librarian Hotties" contest.

The ALA's goal in issuing the calendar is twofold. First, they want to dispel persistent stereotypes of librarians as frumpy late-middle age women in turtlenecks and owl-sized glasses who have their noses buried in books when not watching their "Best of Murder She Wrote" dvd's. Second, they hope to attract the interest of young men ages 16 to 25, a demographic sadly under-represented among the library using population.

Says ALA spokesperson Gladys Stoutbottom: "Let's face it, every young man has a fantasy about the seemingly dowdy librarian who lets her hair down after work and turns into a raving hot nymphomaniac. We're just playing into that fantasy. Next time some young man gets shushed by a bespectacled librarian he'll be wondering what color her panties are. Just you wait and see, boyo."