A Hipper Crowd of Shushers 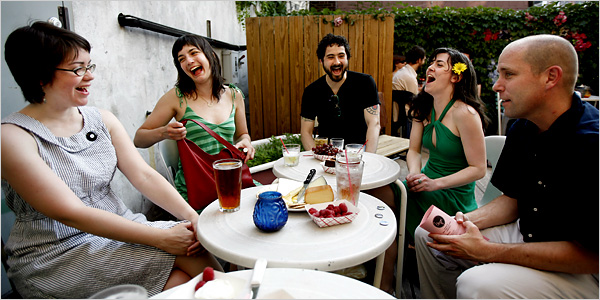 ON a Sunday night last month at Daddy’s, a bar in Williamsburg, Brooklyn, more than a dozen people in their 20s and 30s gathered at a professional soiree, drinking frozen margaritas and nibbling store-bought cookies. With their thrift-store inspired clothes and abundant tattoos, they looked as if they could be filmmakers, Web designers, coffee shop purveyors or artists.

When talk turned to a dance party the group had recently given at a nearby restaurant, their profession became clearer.

“I got the Joy of Sex,” Ms. Yao replied. “I thought for sure it was French Women Don’t Get Fat.”

Ms. Yao could be forgiven for being confused: the drink was numbered and the guests had to guess the name. “613.96 C,” said Ms. Yao, cryptically, then apologized: “Sorry if I talk in Dewey.”

That would be the Dewey Decimal System. The groups’ members were librarians. Or, in some cases, guybrarians.

“He hates being called that,” said Sarah Murphy, one of the evening’s organizers and a founder of the Desk Set, a social group for librarians and library students.

Ms. Murphy was speaking of Jeff Buckley, a reference librarian at a law firm, who had a tattoo of the logo from the Federal Depository Library Program peeking out of his black T-shirt sleeve.

Librarians? Aren’t they supposed to be bespectacled women with a love of classic books and a perpetual annoyance with talkative patrons — the ultimate humorless shushers?

Not any more. With so much of the job involving technology and with a focus now on finding and sharing information beyond just what is available in books, a new type of librarian is emerging — the kind that, according to the Web site Librarian Avengers, is “looking to put the ‘hep cat’ in cataloguing.”

When the cult film “Party Girl” appeared in 1995, with Parker Posey as a night life impresario who finds happiness in the stacks, the idea that a librarian could be cool was a joke.

Now, there is a public librarian who writes dispatches for McSweeney’s Internet Tendency, a favored magazine of the young literati. “Unshelved,” a comic about librarians — yes, there is a comic about librarians — features a hipster librarian character. And, in real life, there are an increasing number of librarians who are notable not just for their pink-streaked hair but also for their passion for pop culture, activism and technology.

“We’re not the typical librarians anymore,” said Rick Block, an adjunct professor at the Long Island University Palmer School and at the Pratt Institute School of Information and Library Science, both graduate schools for librarians, in New York City.

“When I was in library school in the early ’80s, the students weren’t as interesting,” Mr. Block said.

Since then, however, library organizations have been trying to recruit a more diverse group of students and to mentor younger members of the profession.

In the last few years, articles have decried the graying of the profession, noting a large percentage of librarians that would soon be retiring and a seemingly insurmountable demand for replacements. But worries about a mass exodus appear to have been unfounded.

Michele Besant, the librarian at the School of Library and Information Studies at the University of Wisconsin-Madison, said the Association of Library and Information Science statistics show a steady increase in library information science enrollments over the last 10 years. Further, at hers and other schools there is a trend for students to be entering masters programs at a younger age.

The myth prevails that librarians are becoming obsolete. “There’s Google, no one needs us,” Ms. Gentile said, mockingly, over a drink at Daddy’s.

Still, these are high-tech times. Why are people getting into this profession when libraries seem as retro as the granny glasses so many of the members of the Desk Set wear?

“Because it’s cool,” said Ms. Gentile, who works at the Brooklyn Museum.

Ms. Murphy, 29, thinks so, too. An actress who had long considered library school, Ms. Murphy finally decided to sign up after meeting several librarians — in bars.

“People I, going in, would never have expected were from the library field,” she said. “Smart, well-read, interesting, funny people, who seemed to be happy with their jobs.”

Maria Falgoust, 31, is also a founder of Desk Set, which took its name from the 1957 Katharine Hepburn-Spencer Tracy romantic comedy. A student who works part time at the library at Saint Ann’s School, she was inspired to become a librarian by a friend, a public librarian who works with teenagers and goes to rock shows regularly.

Since matriculating to Palmer, Ms. Falgoust has met plenty of other like-minded librarians at places such as Brooklyn Label, a restaurant, and at Punk Rope, an exercise class. “They’re everywhere you go,” she said.

Especially in Greenpoint, where Ms. Murphy and Ms. Falgoust live about 10 blocks from each other and where there are, Ms. Falgoust said, about 13 other librarians in the neighborhood.

How did such a nerdy profession become cool — aside from the fact that a certain amount of nerdiness is now cool? Many young librarians and library professors said that the work is no longer just about books but also about organizing and connecting people with information, including music and movies.

And though many librarians say that they, like nurses or priests, are called to the profession, they also say the job is stable, intellectually stimulating and can have reasonable hours — perfect for creative types who want to pursue their passions outside of work and don’t want to finance their pursuits by waiting tables. (The median salary for librarians was about $51,000 in 2006, according to the American Library Association-Allied Professional Organization.)

“I wanted to do something different, something maybe more meaningful,” said Carrie Klein, 36, who used to be a publicist for a record label and for bands such as Radiohead and the Foo Fighters, but is now starting a new job in the library at Entertainment Weekly.

Michelle Campbell, 26, a librarian in Washington, said that librarianship is a haven for left-wing social engagement, which is particularly appealing to the young librarians she knows. “Especially those of us who graduated around the same time as the Patriot Act,” Ms. Campbell said. “We see what happens when information is restricted.”

Ms. Campbell added that she became a librarian because it “combined a geeky intellectualism” with information technology skills and social activism.

Jessamyn West, 38, an editor of “Revolting Librarians Redux: Radical Librarians Speak Out” a book that promotes social responsibility in librarianship, and the librarian behind the Web site librarian.net (its tagline is “putting the rarin’ back in librarian since 1999”) agreed that many new librarians are attracted to what they call the “Library 2.0” phenomenon. “It’s become a techie profession,” she said.

In a typical day, Ms. West might send instant and e-mail messages to patrons, many of who do their research online rather than in the library. She might also check Twitter, MySpace and other social networking sites, post to her various blogs and keep current through MetaFilter and RSS feeds. Some librarians also create Wikis or podcasts.

At the American Librarian Association’s annual conference last month in Washington, there were display tables of graphic novels, manga and comic books. In addition to a panel called “No Shushing Required,” there were sessions on social networking and zines and one called “Future Friends: Marketing Reference and User Services to Generation X.”

On a Saturday, after a day of panels, a group of librarians relaxed and danced at Selam Restaurant. Sarah Mercure nursed a blueberry vodka and cranberry juice and talked about deciding on her career after hearing a librarian who curated a zine collection speak. Pete Welsch, a D.J., spun records and talked about how his interest in social activism, film and music led him to library school.

But some librarians have found the job can be at odds with their outside cultural interests.

“I went to see a band a few weeks ago with old co-workers and turned to one and said ‘Is it just me or is this really, really loud?’ ” said Ms. Klein, the former publicist. Her friend, she said, “laughed and said, ‘You have librarian ears now.’ ”